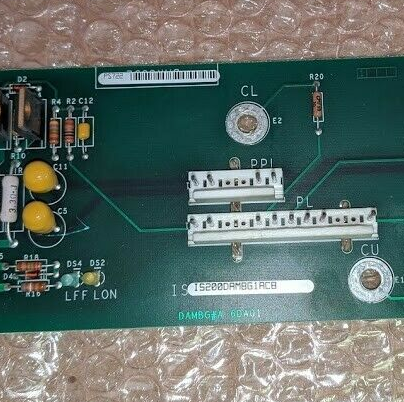 The IS200DAMBG1A was made as a component in the Speedtronic Mark VI series by General Electric or GE. The Mark VI is one of several series in GE’s Mark line. This device is a type of printed circuit board or PCB. The IS200DAMBG1A is what is called a gate driver card.

The IS200DAMBG1 developed by General Electric is a device called a gate driver card. This is a type of printed circuit board or PCB made for the Mark VI series of gas/steam turbine controls. It is a small rectangular board with several electronic components positioned on each side and a few that have been placed in the PCB?s center. There is a group of four (4) round yellow capacitors, a variety of small banded resistors, two small LEDs or light-emitting diodes and two small integrated circuits that have been attached to the upper left corner. The center portion of the IS200DAMBG1 contains two (2) white components which are long and rectangular.