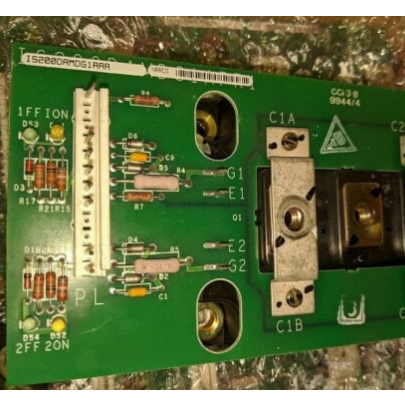 The IS200DAMDG1AAA is a type of PCB or printed circuit board which was produced by GE or General Electric. This circuit board was created to be a component in the Mark VI series for the control of gas/steam turbines. The Mark VI is the most recent series in General Electric’s Mark line. The Mark VI and the systems that came before it have been used to control turbines across a variety of industries for more than forty years.

The IS200DAMDG1A is made up of a small circuit board which is C-shaped and a circuit board shaped like a square which is connected to its right side. On the left half of the C-shaped card there is a long solid white component which lies horizontally on the surface of the PCB. Two (2) resistors which are solid white have been situated directly next to the large white component. A variety of very small components are also located on this end of the IS200DAMDG1A. Sitting on the right half of the IS200DAMDG1A is a large black piece which contains a silver metal part in the middle. The large white component has been connected to the surface of the board with a long metal piece that is silver on either side. The IS200DAMDG1A and the rest of the DAMD boards contain four (4) small LEDs or light-emitting diodes. The diodes which are labeled as DS2 and DS1 are colored yellow and the two others, labeled as DS4 and DS3, are green in color. The DS1 also has the name 1ON. DS2 features the name 2ON, and the DS and DS3 feature the names 2FF and 1FF respectively. These PCBs feature twelve (12) IGBT connector pins. These pins are named COM2, G21N, C2, NC, G1IN, COM1, and C1.

The IS200DAMDG1 developed by General Electric is a printed circuit board or PCB created by General Electric or GE. This device was developed as a part of the Mark VI series of gas and steam turbine controls. It is designed as a small board shaped like a C and a square-shaped board attached on its right side. On the left side of the C-shaped half is a long white component which is lying vertically on the board?s surface. There are two solid white resistors that are positioned right next to this large component and many small components are visible on the side of this board. It also features four small light-emitting diodes or LEDs that are labeled as DS1 and DS2 light up yellow and the other two, labeled as DS3 and DS4, light up green. The DS1 is also named 1ON. DS2 is named 2ON, and the DS3 and DS4 are named IFF and 2FF respectively. These circuit boards contain twelve IGBT connection pins. These are named G21N, COM2, NC, C2, COM1, G1IN, and C1.