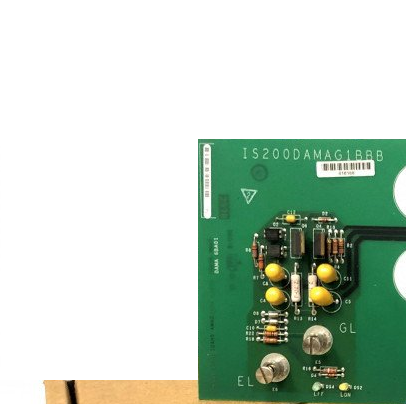 The IS200DAMAG1BCB is a printed circuit board (PCB) designed to function as a Gate Drive Amplifier/Interface board within General Electric Innovation Series Low Voltage 620 frame drive systems.   These drives can be used as part of GE’s Mark VI Speedtronic systems to control gas or steam industrial systems.  The MKVI was one of the final Speedtronic systems to be released by the company after decades of research and development and multiple iterations from the Mark I onward.

The IS200DAMAG1BCB is an uncluttered board that works in conjunction with two legs of IGBT modules.  It connects to both upper phase leg and lower phase leg IGBTs (typically CM1000HA-28 H Powerrex)  via direct connection.  The board also connects to the Bridge personality Interface board (BPIA.) Connections are done through the multiple pins on two connectors, including a 12-pin vertical connector and a 6-pin vertical connector.  GE Publication GEI-100262A provides a full list of each pin and its use and connection route.

The IS200DAMAG1 developed by General Electric is what is called an insulator-gate bipolar transistor board. This is a type of printed circuit board that was created for the Speedtronic Mark VI series. It features two pairs of yellow capacitors, banded resistors which are medium-sized and light blue in color and they have bands that are black or dark blue and silver. Two transistors are placed beneath these two resistors. The transistors are rectangular and brown with orange metal pieces attached to the top of the devices and are labeled with the reference designator Q, as Q1 and Q2. Sitting next to these transistors are two small LEDs or light-emitting diodes. One of these LEDs is yellow and the other is blue. A few small resistors which have bands that are red, pink and black can be seen as well as a few small silver diodes. On the opposite side of the board, there is another corresponding group with the same components.