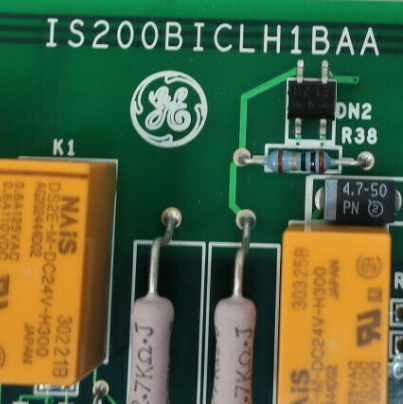 The IS200BICLH1BAA is a GE printed circuit board manufactured as a component for the Mark VI series.  The Mark VI is the fifth iteration of GE’s Speedtronic series for gas and steam turbine management. The MKVI is designed with close coordination between hardware and software, starting with a control module with a 13- or 21-slot VME card rack.   Mark VI series is available in Simplex and Triple redundant forms for small applications and for large integrated systems with modules ranging from one to many.

The IS200BICLH1BAA is built with two backplane connectors.  These are marked P1 and P2. These plug into a VME type rack.  No other connectors are located on the board. The board has very few components but does have a serial 1024-bit memory device, as well as four relays.  Each relay has a relay diagram printed on its top surface. The board has no test points, fuses, or adjustable hardware.

The IS200BICLH1 developed by General Electric is a component for the Mark VI series and is apart of the Speedtronic series for gas/steam turbine management. It functions primarily as a Bridge Interface Board between Bridge Personality Interface boards (BPIA/BPIB/SCNV) and the Innovation Series Drive main control board. It features ambient temperature monitoring and a fan pulse width modulated speed control interface and mounts into a VME type rack and connects via two backplane connectors.

The IS200BICLH1 has a narrow front faceplate that includes the board ID, the GE logo and a single opening. The board should be installed in slot 5 and while the board does not include any kind of LED indicators, fuses, test points or adjustable hardware the board does include four RTD (resistance thermal detector) sensor inputs as well as a serial 1024-bit memory device. The board also has four relays, which are used for several functions.