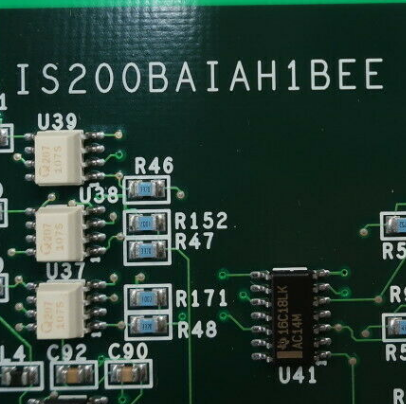 The IS200BAIAH1BEE is a Bridge Application Interface Card that was created by GE for its Innovation Series.

The IS200BAIAH1BEE or BAIA is intended to be a replacement PCB. It has an EEPROM that comes with factory-preloaded firmware. This memory circuit should never be reprogrammed or removed. If it stops working or becomes damaged, the complete board will need to be removed and replaced. The BAIA also uses an RS-232C I/O interface which goes to the drive system keypad or PC from a DSPX board.

The IS200BAIAH1BEE should be placed vertically into the control card rack assembly it is assigned to. On the faceplate of the BAIA, there is a warning label that alerts the user to only mount this card into Slot 1 on the rack. The slots on the rack are specifically configured for certain boards. Installing this board into a slot other than the first one will result in damage to the board. There is an LED indicator on the faceplate that is labeled IMOK.

The IS200BAIAH1BEE has many different components. It has 3 relays, a JTAG connector, 5 jumpers, two transformers, an inductor, 6 transistors, 6 diodes, and over 50 integrated circuits. There are also well over a hundred resistors and capacitors on the BAIA. There are two connectors on the back of the board that slides into card slots that are on the backplane of a card rack assembly.

The IS200BAIAH1B is a PCB designed for the Mark VI series from General Electric. The Mark VI is the fifth release of the Speedtronic steam and gas turbine management system developed with triple-redundant backups on protection parameters and critical controls.   The MKVI includes a computer-based operator interface (either Windows 2000 or XP) and Ethernet communications.

The IS200BAIAH1B is designed to function as a bridge application interface board. This board provides earth-ground reference and isolation for signal inputs from terminal boards.  Each board is designed with an onboard EEPROM containing firmware not intended for removal or field programming.

The IS200BAIAH1B is built with a narrow black front panel.  This panel includes a single green LED that is marked “IMOK.”   The panel also carries the board number and the warning “Install in Slot 1 only.”  The IS200BAIAH1B is an Innovation series board, which is designed to be placed into a specific rack slot. This board can be damaged if it is installed into the improper rack slot.

The IS200BAIAH1B has three relays, six varistors, four jumper switches, three test points,  and several integrated circuits. The board has two backplane connectors located on one edge.    Jumpers should be in either the VIN position or the 4-20 mA position.

The IS200BAIAH1 developed by General Electric is a printed circuit board component for the Mark VI series and a part of the Speedtronic gas/steam turbine management series. This system includes a computer-based operator interface (Windows 2000/XP,) Ethernet communications, and the MK VI Control System Toolbox for making changes within the system. The board functions primarily as a bridge application interface, which provides an earth ground reference and isolation for all signal inputs from user terminal boards. The board converts digital inputs from the DSPX board to analog outputs and also provides an RS-232C Input/Output interface between the DSPX and the drives PC connections and keypad. The board is built with one green light emitting LED diode built into its front panel that will go out automatically if no read or write activity is detected. Though this board has no fuses it does include four analog input jumpers and three TP test points. It connects to the control rack backplane through two connectors labeled P1 and P2 and has three relays and six varistors.