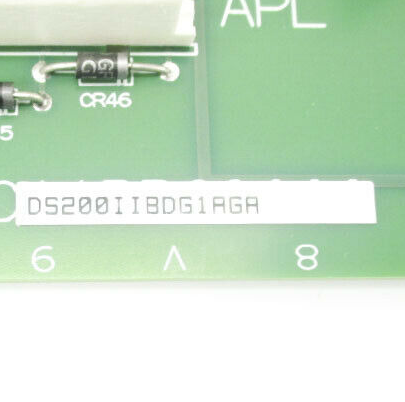 The GE Insulated Gate Bipolar Transistor (IGBT) Board DS200IIBDG1AGA contains nine indicator LEDs that provide a status of the processing. The LEDs are visible from the interior of the circuit board cabinet and are red in color when lit.

The LEDs are located on the board in three groups and each group contains three LEDs. Each group of LEDs is associated with an 8-pin connector that is located adjacent to the LEDs. The LEDs indicate the status of the signal that is received or transmitted from the 8-pin connector.

The three 8-pin connectors are identified as APL, BPL, and CPL on the GE Insulated Gate Bipolar Transistor (IGBT) Board DS200IIBDG1AGA. Also, the board is populated with a 34-pin connector that is comprised of two rows of 17 pins. A ribbon cable can connect to the 34-pin connector. The ribbon cable is connected also to a board in the cabinet and must be routed properly to avoid touching other components. The cabling is confined to the interior of the drive only.

To remove the defective board, you must remove six screws that hold the board in the structure inside the cabinet. When you use a screwdriver to remove the screws, make sure you do not brush against other components in the cabinet or the solder points on the boards. It is important to have a clear view of the components so you can avoid damage. Retrieve any screws that fall into the drive.